A Real Woman of Philadelphia! (the cheese, not the place) – Entering my 1st cooking contest!

This blog post (and video!) is brought to you by the letters A, M and P….and Jen!

All four of them helped out with my video submission…but Jen is the only one of the four that I am positive wouldn’t mind having her name mentioned in my blog.

About a month ago, my mother called me to tell me about a cooking contest she’d heard about; The Real Women of Philadelphia, sponsored by Kraft.  I did a google search, found the website and read through the rules.  You had to submit a recipe that involved Philly cream cheese as an ingredient, plus a video showing how it’s done.  Contest Website

The recipe had to be an original recipes and I thought, “Hey, my mother’s Banana Dessert would be an awesome recipe to submit!  So easy…so yummy!”  The recipe had to be something that could be created in an hour or less and that dessert is easily done in 20 minutes.

So, last Thursday, I booked my friend M’s kitchen, as well as his equipment and knowledge of videography, and we attempted to make my very first cooking video!  Initially I practiced by making a strawberry version.  My friend Jen was on hand for the first practice.  She videoed the preparation, as well as her hunt for a rogue wooden spoon, with a small video camera we had on hand.  When M got home, we set up his webcam and ran through the creation again.  He used the little handycam we had to take close up shots.  The plan was to edit them together afterwards.  So, at the end we had two cheesecakes on hand and I had videos to edit.

Prepping for the video

At this point, I have to share M’s review of this cheesecake.  He absolutely swooned upon taking a bite and when more friends arrived (to help eat the cheesecakes) I asked him to share his review.  With semi-glazed eyes and a big grin (Would you believe you can get high on cream cheese? Or maybe it was the bananas! lol), he said:

“….if you could take all the magical creatures of the forest and gather then up … and puree them into this awesome white and fluffy, magical goodness…”

He never finished.  We were laughing too hard.  THAT’s the kind of reviews I’m looking for! Hehe.

Sadly, M had to run and it was only after he left that I took a good look at the video on my computer.  The lighting was so bright that details were lost.  You couldn’t actually see the ingredients I was using and the glare off of one potlight saturated the area making it unusable.

I couldn’t help but be frustrated and annoyed…I had used up all my ingredients and had two cheesecakes to show for it but no video.

Two friends had shown up, as M left, to help eat the cheesecake, as I have mentioned, and they immediately said, “So go buy more ingredients!  We’ll help record another video!”  Andy even offered to edit it for me.  I was hesitant….well, and cranky. 😉  It was 8pm and…making another cheesecake?  Not really what I wanted to do.  I hemmed and hawed….”I dunno….”  The Boy called from the road to say hi and, after I explained (well…ranted about) the predicament, he too said “Do it!!”

So, we headed to the grocery store…I bought ingredients…and we returned to M’s kitchen to start again.

The guys were great!  We had a lot of fun prepping the ingredients for Takes 3 and 4….Yes!  I had four cheesecakes at the absolute end of it all!  And…I had a video.  Thanks to M and A and P and Jen for all their help, including use of the kitchen and editing!  You guys rock!

Over the holidays, I made my mother’s famous Banana Dessert…. twice.  Both times, it went over incredibly well…at one party lasting about 10 minutes before the whole pan was gone!  The ultimate compliment! 🙂

Effectively, it’s a cheesecake dessert but with more of a pudding texture than the typical New York cheesecake that I’m used to…but either way…it’s CheeseCake!  ‘Nuff said! 🙂

It’s a fairly straightforward recipe, which you can find on my twin blog: Recipes from Edible Noir.

Before you go ahead and try it, I have to warn you that this dessert is incredibly rich!  And in my opinion, it makes it difficult to stop at one serving!  It goes over really well at parties and the best part?  It is SO easy to make!

My mother traditionally uses bananas but the fruit could be almost anything.  She once used kiwi, which was interesting and still quite yummy.  I would love to hear from any readers who substitute different fruit in the recipe. I keep meaning to try a berry of some kind but somehow, I always fall back on the traditional banana flavour.

I began by mixing together graham cracker crumbs, butter and sugar and then patting it into my baking dish.

I decided to heat up the butter for two reasons.  One, I figured it would be easier to mix.  And two, once I patted the base into my baking pan, I assumed the butter would then solidify and more effectively hold it together. Thoughts?

I used a 9″ x 12″ pan.  That is the largest you could go following my recipe amounts.  For a more substantial bottom, I would probably pick a dish one size smaller.

Next, beat together the cream cheese and condensed milk until smooth. I tried beating it by hand with a wooden spoon but eventually I switched to an electric hand mixer.  I don’t think my arm would have lasted long enough to get all the lumps out. *wink*  Once you have mixed them well, set the bowl aside. 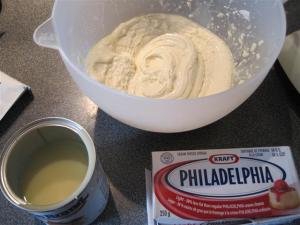 In a second bowl, mix 2 packages of Dream Whip according to the directions on the box, which will include the vanilla and milk.  I need to mention at this point that this isn’t meant to be a Kraft advertisement.  My mother has always used this product for this particular dessert and I have never experimented with any other whipped cream.  If any of you attempt this recipe and use a different type of whipped cream, please let me know how it turns out!

Once it is whipped and fluffy, fold in the cream cheese mixture.  (The following picture is a little misleading.  I didn’t use a mixer for this part, simply a wooden spoon to softly fold the two mixtures together.)

Once mixed, add the bananas and gently stir again until fully mixed. 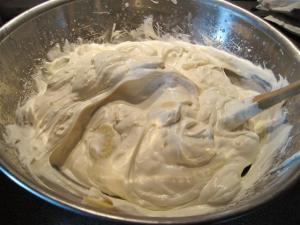 Pour the topping over the graham cracker bottom. Sprinkle a bit of graham over the top and refrigerate overnight for best results.

If using bananas, dessert must be eaten within a couple of days as the bananas will turn black.

NOTE: If using bananas, dessert must be eaten within a couple of days as the bananas will turn black.