Recently I came across a bacon recipe online HERE that I absolutely HAD to try!

Bacon is one of the reasons I am not vegetarian. *wink*

I have made this recipe a couple times now and enough people have asked me for the recipe that I have decided to write out what I do to make them on here, along with additional suggestions based on my experience. 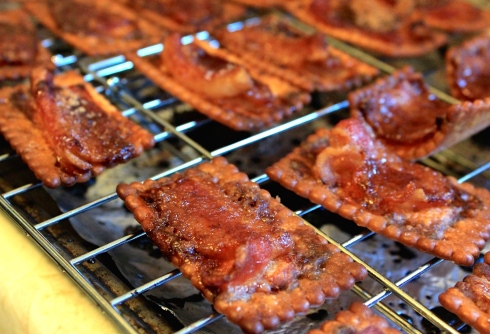 First up, you need a wire rack of some kind.  You are going to have “drip-age” and it’s better to have it drip away from the crackers 😉
I used two cooling racks placed on top of a cookie sheet which I lined with foil.  Allowed for easy clean up!

Next, you need crackers.  I have used Toppables and they stand up quite well to the bacon and the baking.

Although they have this interested way of curling up! 🙂

Place the crackers on the wire rack and then prep your bacon.  Cut it into squares that fit on top of each cracker avoiding any oversized pieces that hang over the edges. 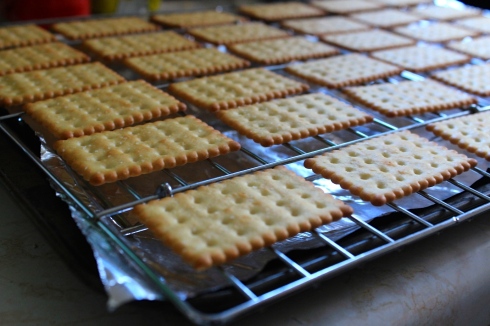 NOTE #1: I have made these with cheaper bacon from the grocery store, as well as with high quality naturally fed bacon from a local meat counter.  The cheaper bacon worked out better.  It was saltier and you need that salt to cut through the sweet you are about to add.  Also, thinner cut bacon is better.

Third, sprinkle each piece of bacon with a good amount of brown sugar.

Fourth, sprinkle each piece with a BIT of cayenne pepper. 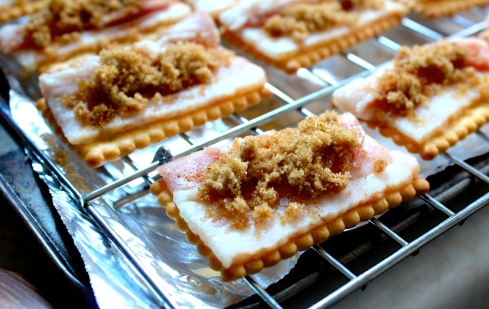 Bake them for 10 minutes, turn them and bake for another 10 minutes.  I found I needed another 5-10 minutes beyond that so you will want to watch them after the first 20 minutes (Total baking time: 20-30 minutes)

Note #2: They don’t seem to keep well, although this may be due to the type of crackers that I used.  I found that they were somewhat soggy on the following day.  So, best eaten soon after creation! 🙂

Last night I had some friends over and we decided to do a bit of a potluck.  Earlier in the week, I had purchased a package of two pork tenderloins so I figured I would make some type of meat dish for everyone.

I had a lot to do around the house to prepare for the party so I didn’t want anything too cumbersome.  I wanted to make something quick and easy that wouldn’t require a lot of attention.

Bring in the Crock Pot!

I put the two tenderloins in my crock pot, covered them with a marinade and let them cook on low for about 5 hrs or so.  By the time we went to remove them, they were fall-apart-melt-in-your-mouth delicious! 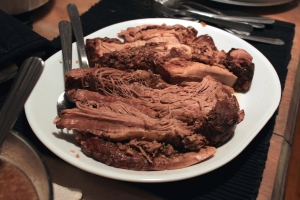 So, I put them in the crock pot and added the following:

Cooked it on low for about 5 hours and it was fantastic!

It creates an amazing sauce for gravy in the end so we whisked up the juices and added some cornstarch.

I suppose in hindsight, the one thing I would change is the onion soup mix…if for no other reason than trying to reduce the sodium content.  My soy sauce was low in salt but the resulting dish was *almost* too salty….

But instead ended up on this side of delicious!

I have made shepherd’s pie dozens of times.  In my early years of cooking…that would be two years ago now…I used boxed potatoes.  That was partly to save time and partly because I didn’t want to go through the rigmarole of peeling and prepping potatoes.

Years later, I realize how simple prepping potatoes can be and I now make my own.  Not only because I can, but also due to my newfound desire to reduce the amount of processed food I eat.  This extends to canned goods and boxed goods…I try my best to make my own ingredients, rather than buying pre-made, pre-processed crap.

And so, my shepherd’s pie has gone through a few versions over the past little while.  My “classic” version can be found earlier in this blog….“No, not Shep Pie….Shepherd’s Pie! Shep-HERD!”

Recently I decided to try to mix things up a bit.  The result was…um…interesting 🙂

I sautéed an onion in oil along with a couple of garlic cloves.
While the onions did their thing…which included simply smelling good (is there anything better than the smell of slow cooking onions??)…I peeled and chopped up my potatoes…..

Yep…sweet potatoes! 5 of them to be exact

That’s right…I decided to go with local Ontario sweet potatoes to see how they would play with the flavour of shepherd’s pie. I always slice them into 1/2″ rounds as I find they cook that much faster!  Boiled them for barely half and hour and they were tender….

Once the onions were tender, I added the meat…this time, rather than my typical beef, I decided to try ground pork.

Added 2 lbs of ground beef to the mix!

Browned the meat completely.  As it cooked, I added Italian Seasoning (a mix of thyme, oregano and basil), a splash of soya sauce and Worcestershire sauce, as well as a bit of cayenne pepper, salt and pepper. It was at that point that I realized a) I had gotten lean ground meat and was therefore left with a lot of fat and juice and b) my pan wasn’t deep enough to hold the onions and meat, as well as the vegetables I planned to add.  So I used a slotted spoon to remove the meat/onion mix from the pan and put in into a deeper pot.

Then I added my chosen vegetables…pretty simple actually…chopped celery and carrot. 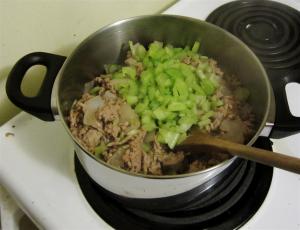 I also got it into my head that I would add some tomato sauce. I was thinking perhaps that would help to hold the base together as my shepherd’s pie always seems to fall apart when I serve it.

It didn’t work…which you’ll see at the end.  Grrrrr.

Once the veggies were somewhat tender and all was mixed well, I created a base layer in my casserole dish for my shepherd’s pie.

Then I decided to be creative and added a layer of corn…which…um, yeah…it came from a can. After my rant earlier about canned goods, I use canned corn. But seriously, what were my options? Use a fork and pry kernels from a cob?

All that yummy goodness…topped with sweet potatoes! And parmesan cheese!! …Obviously that part is optional, unless like me, you’re partial to yummy cheese!

I cooked these the same way as the beef version…. 400 degree oven until potatoes start to brown (about 30 minutes). Broil for last few minutes if necessary to brown further.

As I already mentioned, my shepherd’s pie tends to fall apart when I cut portions.

Not sure what I’m missing in my recipes but I remember eating it growing up and having it served almost as a slice of pie…where both layers hold themselves together.

It was good.  Not spectacular, but good.  I admit that I much prefer a beef base than pork and the sweet potatoes added a bit too much “sweet” to the pie.  But overall, a good experiment that tasted even better the following day!