Don’t be alarmed…but this post contains TWO…yes TWO recipes at the bottom! 🙂

Recently we were away visiting my partner’s brother on the family farm.  Aside from a lovely piece of land and variety of animals, they also have a fantastic garden that creates more gigantic zucchinis than one knows what to do with!

We came home with four and today I finally used up a couple of them.

I think I see a stir fry in our future!

So, to use up the zucchini we had, I decided to make zucchini bread and chocolate zucchini muffins.  The bread turned out awesome! Moist and yet dense enough that it doesn’t fall apart when you cut and butter it.

The muffins are brilliant too…the only problem is that I left them in 3 or 4 mins too long and the bottoms started to burn.  Luckily they’re slightly crisp but it’s really not noticeable, especially when you’re distracted by the chocolatey goodness!

You can see the crispy bottoms in this picture

I have to say that I’m extra happy with how they turned out…since I had to substitute ingredients because there were items I either didn’t have or that ran out as I worked.  Substitutions for the win!

Here are the substitutions I made….

The bread is lovely and semi sweet whereas the muffins are chocolatey and delicious…no sign of healthy zucchini in them anywhere! (I swear though, I DID add it!)

I have altered the recipes below to include my substitutions since I really like how everything turned out.

So this isn’t going to be a regular blog post. I have no recipe to share, only a set of screamingly happy tastebuds prompting me to write this 🙂 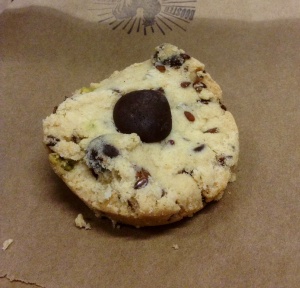 Shortbread with chocolate, flax seeds, pumpkin seeds and a hint of cinnamon.

I am now on the hunt for a recipe as my grandmothers shortbread recipe creates cookies that I feel are too flaky to handle the addition of seeds.

Anyone have a recipe out there??

A few weeks before Halloween,  I got it into my head that I wanted to do some cooking with pumpkins.
Pumpkins muffins were particularly on my mind.

In early October, I attended an event with a table of goodies, all made by the attendees. Each dish was posted with the corresponding list of ingredients so people knew what was gluten-free, vegan etc.  The pumpkin muffins I had were delicious!  So flavourful, moist and tender…so I snapped a shot of the ingredients list! Kinda blurry, but there is it! 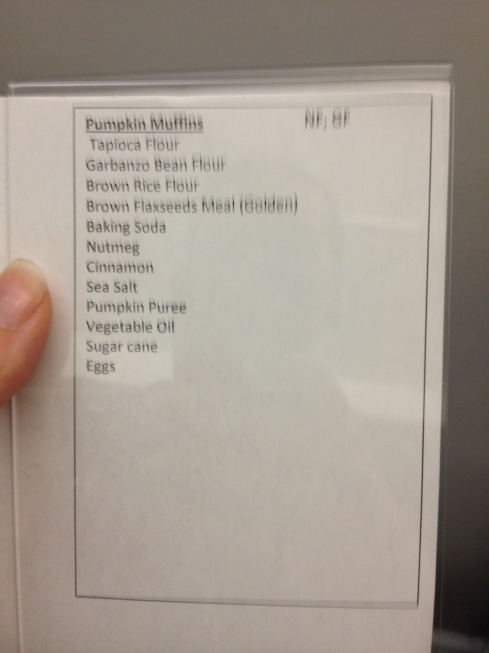 I spent some time googling those ingredients, trying to find a matching recipe and I came across one that was pretty close, listed at the bottom of this post.

Along with my desire to make pumpkin muffins came my desire to make my own fresh pumpkin puree rather than going to the store and buying  the canned stuff.
B suggested I wait until just after Halloween, as all the remaining pumpkins would be on sale.

Well, not that they weren’t on sale, but the problem was that they were freakin’ hard to find!  I scoured my whole neighbourhood…hitting a number of small independent veggie markets as well as the large grocery store nearby.  In the end, as I began to consider stealing pumpkins off porches, I came across three of them.  I’m thinking they were probably the last three pumpkins in west Toronto!

During my pumpkin scouting adventure, I learned the difference between sugar pumpkins and other not-sugar pumpkins.  From what I read, it simply refers to the size of the pumpkin. Six to eight inches in diameter is great for cooking.  They bigger they are, the less flavour and texture they have.

Not surprising. Isn’t that the way with every fruit and vegetable out there?

So, I walked home with three sugar pumpkins. Wish I had a picture of that!  The ultimate in awkward!

Instead, I only have this shot:

Trying to get three pumpkins from one room to the other, all at the same time, was challenging 😉

I had done some reading on creating pumpkin puree and one of the most exciting things about it? I had another opportunity to use my cleaver!!! 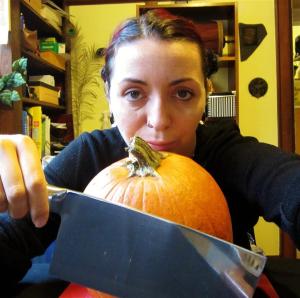 Sssshhhhh, it’s all right. It’ll all be over in minute!

Unfortunately, what the websites didn’t tell me was that a cleaver isn’t the best choice for this job!

Unlike the rutabaga I cleaved to death in a previous post (*sigh* that was SO much fun!), pumpkin doesn’t quite work that way. I assume that’s due to the hollow centre.

I sadly had to return the cleaver to its hiding place and used a regular chef’s knife to get the job done. It was surprisingly easy to halve them.

Next up for pumpkin puree, scrape out the guts. Sounds appetizing, doesn’t it?

….It is at this moment that I would like to pause and recognize the annual sacrifice offered by pumpkins everywhere…pie, muffins, soup, cheesecake, even lattes…we are ever thankful

As Buffy put it many years ago (Eeeek! It *really* WAS  many years ago!!!)
“I was just thinking about the life of a pumpkin. Grow up in the sun, happily entwined with others, and then someone comes along, cuts you open, and rips your guts out.”

So yes, you scrape out guts. I didn’t keep the seeds.  Thought about roasting them. Got lazy.

Once scraped clean, I cut my pumpkins into four as they seemed to roast faster that way. 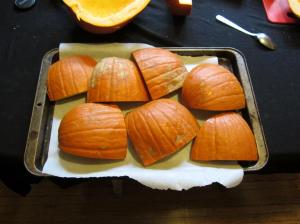 I set my oven to 400 F and roasted the pumpkin until it was tender enough to allow a fork or knife to pierce the skin…about 30-45 mins depending.

Once tender, remove them from the oven, set them out and allow them to cool, just a bit. It surprised me how yellow the flesh was…and the skins darkened up quite a bit.

I removed the overcooked black bits bits and while the pieces were still quite hot, I peeled the flesh from the skin into a bowl. I found that the hotter they were, the easier they peeled.

Once I had peeled all of them, I used my handblender to puree the flesh.  Then I used a strainer to separate the stingy bits from the purée   This took a bit of time but it was worth it to have the smooth consistency at the end.

Pushing my purée through a fine strainer.

Two 8 inch pumpkins gave me about 9 cups of purée.  I used up some and then froze the rest in 2 cup freezer bags.

So to finish up this post, I will include my pumpkin muffin recipe!  As mentioned, I looked up the recipe online and found it…although I question the measurements as the muffins I made weren’t as soft and moist as the ones I tried in October.  Suggestions? What ingredient would you increase or decrease?

I will say that I had an interesting time finding the appropriate flours to use.  One store had them all…but first I had to discover that:
1) tapioca starch is the same as tapioca flour
2) garbanzo bean flour is the same as chickpea flour

Prior to making this recipe, I didn’t know either of those things…so I figured I’d share. 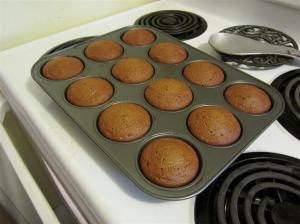 Gather some pumpkins…6 to 8 inches in diameter.
I found each pumpkin created approx 4 or 5 cups of puree.

Preheat oven to 400F.
Cut pumpkins in half and scrape out the insides.
Then, cut them into fours.
Place them flesh down on a cookie sheet and bake for 30-45 mins.
The  skin will darken and you will know they are done when a knife or fork slides easily through the skin.
Remove from the oven and place upright on either the same sheet or another surface.
Allow them to cool *slightly*. The hotter you can handle, the easier I found it was to peel away the skin.  But be careful and don’t burn yourself!
Gather all the flesh into a large bowl and go at it with a handblender (or a food processor if you have one).

This next step is optional:
For a smooth purée similar to the canned texture you can purchase, use a strainer and separate the puree from the stringy bits.  This will probably take a little bit of time but I found it well worth the effort!

And there you are! Fresh pumpkin purée!
The first time I made it, it took a few hours as I didn’t quite know what I was doing.
The second time, I cut my prep time in half so don’t give up if it takes awhile the first time around! 🙂

The recipe was found on the internet in a variety of places and has been adapted slightly. The website I used for reference is found here.